A REGIONAL APPROACH TO DECARBONISATION THAT CAN LEAD THE WORLD

The race is on for Wales to take control of its decarbonisation and to potentially lead the world in industrial transformation, say Costain’s David Jukes, Sarah Bowles and Hywel Woolf.

The South Wales Industrial Cluster (SWIC) industrial decarbonisation challenge deployment project, led by Costain, was granted phase two funding from UK Research and Innovation (UKRI) of nearly £20m back in April 2021 following successful completion of phase one assessments looking at decarbonisation schemes and the infrastructure required for a hydrogen economy in South Wales. Industry match funding from the 17 partners brings the total project funding to £37.6m.

Phase two of the project involves engineering studies to explore the routes to decarbonisation, including the use and production of a hydrogen supply, carbon capture usage and storage and CO2 shipping from South Wales, which would be the first CO2 shipping industry in the whole of the UK and would create an entire new industry for the region.

The project is supported by a range of partner organisations from the industrial, academic, law, public and private sectors working across the region to create the world’s first net zero emissions industrial zone. As well as contributing to the UK’s carbon reduction commitment, the project will enhance the UK’s ability to locally manufacture low or net zero carbon cement and steel products, helping to drive the low carbon future of UK construction and other sectors. 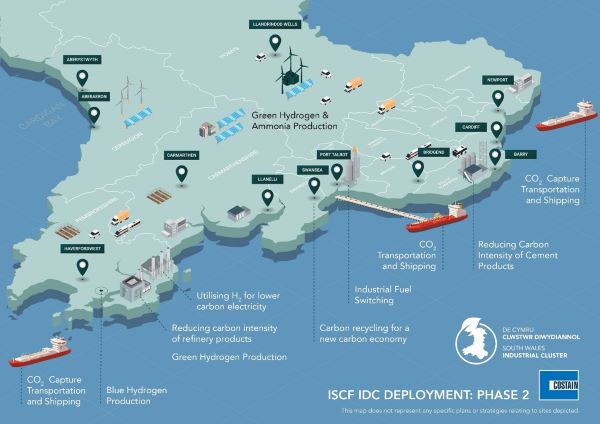 The scheme is ambitious and aligned to the government’s ten-point plan for a green industrial revolution. It will include a number of engineering studies into a range of important areas.

David Jukes, programme development director at Costain and leader of the SWIC deployment project, said: “There is huge passion and enthusiasm for Wales to once again lead the world in industrial transformation. It’s still part of our psyche in this part of Wales and that has helped engender a joined-up and holistic approach between all 17 partners in the SWIC deployment project, as well as the colleagues we work with in local authorities, regional government and the Welsh government. Everyone is pulling together in the same direction; and that holds true for our counterparts in the North Wales Ambition Board, Swansea Bay City Deal and Mid Wales Growth Deal, who we continually converse with.”

Jukes said that that the two South Wales regions and South West Wales regions will play an important part in the project. “Cardiff capital region is effectively a gateway to the Midlands, to Somerset and Gloucester - and as far west as Reading and the South West Wales region, including Milford Haven, is currently responsible for over 20% of the UK’s energy,” he said. “Imagine a decarbonised world where significant areas of the UK are fuelled using hydrogen and green electricity, by our region. That’s achievable - and gives an idea of the economic strength that decarbonisation can bring. But - and it’s a big ‘but’ - we have to start realising that scenario right now,” Jukes said.

Jukes thinks that there is a worldwide wave about to happen and Wales has the opportunity to ride that wave. “If we miss it, we’ll miss the opportunity to enjoy the benefits of anywhere between £2bn and £4bn additional investment in South Wales every year, for the next 29 years. It’s our opportunity to create sustainable skills and highly paid aspirational jobs that can be a catalyst to transform Wales, socially and economically.,” he said.

The potential to ride that wave is certainly there, Jukes claims, with experts in place doing great work. “We already have world-class people working as decarbonisation and hydrogen experts in our universities - and world-leading facilities such as the Cardiff University Gas Turbine Research Centre in Port Talbot and the University of South Wales Hydrogen Research Centre led by John Maddy. We either take control of our decarbonisation or it will be done to us and someone else will enjoy the advantages that go with it. It is a race to zero, in so many ways,” said Jukes.

Owned by the industry; acting on behalf of the industry. Delivering the intelligence that is critical to success in infrastructure.

Keep up-to-date with the latest from EIC, our members and the industry